Molecular characterization and ageing of the sandarac resin and its principal component communic acid.

Six compounds with labdane and pimarane skeletons were identified in the commercial resin. The obtained mass spectra were interpreted and the mass spectrometric behaviour of these diterpenoids under EI conditions was described. Quantitative analysis by the method of internal standard revealed that identified diterpenoids represent only 10–30% of the analysed sample. The polymerization of the sandarac resin was described with a model that postulated the communic acid to be the precursor compound responsible for the resin reticulation. Ageing of a single communic acid resulted in a remarkably wide variety of products, indicating multiple activation points and progressive reaction of initial product. Different numbers of oxygen atoms were incorporated, leading to signals with a mass difference of 16 Da. Simultaneous loss of hydrogen (e.g. by allylic oxidation or oxidation from alcohols to acids) leaded to mass increases of 14 Da.
The sandarac resin from different suppliers was analysed (from Kremer, Okhra, Color Rare, La Marchande de Couleurs, L’Atelier Montessori, Hevea). The analysis of different lumps of resins showed that the chemical composition differs from one lump to another, varying mainly in the relative distributions of the components. The complexity of the reticulated fraction of the commercial sandarac resin was well reflected by the MALDI-TOF and ESI-Orbitrap mass spectra. As a result, MALDI-TOF mass spectra comprised three clusters of peaks in the m/z range of 300–900, and for the ESI- Orbitrap mass spectra contained five clusters of peaks in the m/z range of 300–1100. The peaks in the clusters corresponded to the oxygenated derivatives of the diterpenoids. The results obtained from the IRCP (Inversion Recovery Cross-Polarization) experiments revealed the rigid character of the sandarac resin samples analyzed and justified the hypothesis that the rest of the sample, which could not be quantified by the method of internal standard, would have a polymeric nature. Key words: Varnish, sandarac, diterpenoid, communic acid, GC-MS, MALDI-TOF, ESI – Orbitrap, NMR. 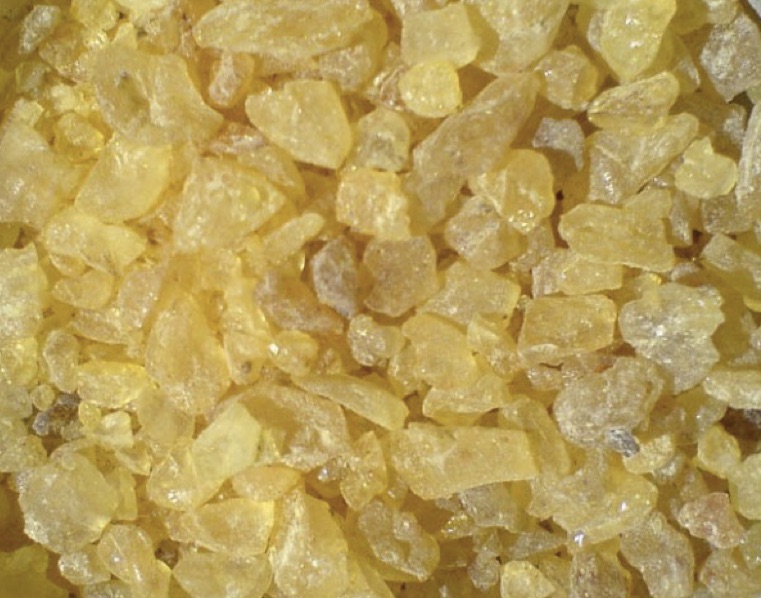